After the America3-induced deep immersion into Advanced Composites in 1992, things took off. On every front; spars for production yachts, medium-sized offshore racers, maxi boats, mega yachts and the America’s Cup soon followed. 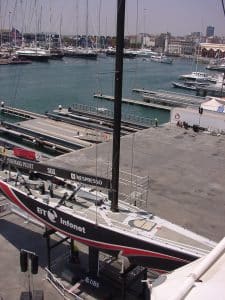 J-Boats led the production spar market with carbon mast options for their J-120 and 130 models. Most ordered the carbon option. At the same time, we received our first order (finally!) from Nautor’s Swan with a carbon rig for the Swan 60, Spirit of Jethou.

“We tried to take your rig out with a bunch of broaches, but it wouldn’t go!”

It was clear that the carbon rigs were not only half the weight but close to twice as strong. Gone were the days where after a windy summer day, customers would call saying their mast broke or bent in a hard manoeuvre. These carbon rigs turned out to more bombproof than we ever imagined.  No more late summer offseason work!

In the early 2000s, we started making inroads to Maxi and Mega Yachts. In the late 90s, we sold a rig for the Baltic 148 Visione as a high-performance mast instead of the over-designed, heavy “safe” carbon masts that were characteristic of early carbon equipped Mega Yachts. We were confident with high-pressure autoclave curing we could make an equally safe, weight-optimized high-performance mast for this size boat.

We stepped Visione’s mast in late November in Finland. It was COLD! On the first sail trial, there was glare ice on the foredeck, especially unsettling because the foredeck was clear of obstacles and the leeward rail was minimal. Visione still races in the Mega Yacht Circuit, now with an even more weight-optimized mast (300 kgs lighter), delivered in 2012.

At the same time, we built several masts for maxi yachts like Windquest and Morning Glory.

It was during this time that another key player, Andrea Merani, joined Hall. Andrea covered the Italian market and came to us from Wally Yachts. His office and operation in his town in Civitanova in the province of Marche were first class. Anyone who knows Andrea enjoys his company. I was no exception. I loved visiting him and his family and my wife and I skied many times with him and his wife Monica.

Andrea was close to Wally founder Luca Bassani and brought us the Wally’s rig account. The first was for the 98-footer Alexia, still one of the most elegantly beautiful boats around. Then came the Wally 94 footers, one of which was Open Season, a boat I spent ten years crewing on in the European fixtures in Palma, Porto Cervo and St. Tropez. Soon after came a rig for 143-footer Esence and a few years later our biggest rig ever for the Wally 160-footer Better Place. During trials, I had a chance to go to the top of Better Place’s 215 ft high rig while docked. Phone photos from there looked like the views out of the airplane on final approach to Newport airport. 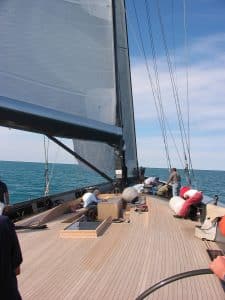 During all of this time America’s Cup work was full-on. In 1995 we continued making all kinds of spar products for the all-women crewed Defiant and PACT95. At this point though we still hadn’t got orders for the actual masts.

That changed for the 2000 Cup. John Marshall, who I have sailed with and against all my life, chose us for all the spar work on his new team, Young America. Young America was designed by Bruce Farr and built by Bristol neighbour Eric Goetz.

At about that time another key figure joined Hall, Scott Ferguson. At a post regatta function at New York Yacht Club’s Harbour Court, I talked to Scott about how he did in whatever race he’d sailed in that weekend. It suddenly occurred to me we had to hire this guy. Ben agreed and we did.

Scott’s the full package: first, he’s a fellow University of Michigan Naval Architecture grad; second, he’s a hockey player and third his disposition is as sunny as it gets. By far the most important, though, he is a great engineer with relentless intellectual curiosity. As soon as he started with us, he completely rewrote our entire mast design program and learned, then applied Finite Element Analysis to our program.

He went to work on Young America’s rig with Farr’s gifted engineer Russell Bowler. The two created a mast that took advantage of loose tolerance rules on fore and aft section dimensions creating a quasi-wing-shaped mast. They also found a rule loophole allowing the mast to rotate slightly, something they secretly cleared with the AC jury.

The boat and mast were shipped to Auckland where first sailing trials were scheduled.

Directly across a 100-ft channel from where we were assembling the mast was a Team New Zealand hospitality house on a barge. While assembling the mast, we regularly saw Brad Butterworth and Russell Coutts eyeing our work on the mast through binoculars, the mast butt end nearest them. We covered the butt as if we had something to hide and kept the cover on while we stepped the mast. There was nothing special to cover up but, you know, gamesmanship.

We had an amusing (in hindsight!) moment during the first sail trials in Auckland. Because the mast’s dimension was longer fore and aft at the gooseneck that at the partner, the pivoting points for the boom and vang were offset. No problem, right?

Wrong. We started sailing the first day in light air on a reach, then a run. When we jibed, the vang/boom gooseneck offsets caused the end of the boom to drop as it approached the boat’s centerline, barely missing the wheels and Ed Baird who was steering. Ed was not amused. We had to instantly put Kenny Madeiro on a plane to come fix it by vertically lining up the two goosenecks.

Young America turned out to be a weapon. She was winning almost all her races and it seemed none of the others could touch her.

She was 14-2 when disaster struck.

I was home in Bristol watching the race on a primitive Pac Man type app when the boat’s icon just stopped moving. I had to leave for a hockey commitment and after entering the rink, I heard Young America had broken in half, but somehow was staying afloat. But no other news was forthcoming.

The next day at work we heard that Jerry Kirby had noticed that the boat wasn’t immediately sinking and jumped back aboard when he noticed the boom was jammed between deck and crew floor. He immediately started pumping the vang hydraulic which forced the boom onto the crew floor and started to straighten the boat. Luckily our boom held together under the load. When the vang reached its limit, the boom had pushed to boat halfway back to straight, saving it from opening and sinking.

The crew obviously must have been devastated, but business is business and I put in a call to the compound and Bobby Campbell, who ran the shore operation, answered.

“Bobby, Hall Spars has a problem with what you guys did yesterday.”

“Eric, I’m sorry but today we don’t care about any Hall Spars problem,” he said more than just a bit testily.

“Sorry Bobby, but we must inform you that yesterday you voided the warranty on the boom when you pushed the boat straight with it.”

“WHAT?” Then a pause. Then he broke out in laughter. “Thank you, Eric, it’s the first thing I’ve had to laugh about in 24 hours!”

Team New Zealand won easily. Team New Zealand had a differently rigged mast, dubbed the “Millennial Rig” after they won. Would our rig have worn that mantel had Young America continued her run? We’ll never know.

After the Cup Russell Coutts and the key sailors from the Team New Zealand famously “followed the money” and defected to Ernesto Bertarelli’s Swiss America’s Cup Team Alinghi.

Not long afterwards Russell visited us at Hall and discussed rigs for Alinghi. It took a while and some lobbying at European regattas on my part, but eventually, he told me that we would make Alinghi’s spars. Ben took over the project working closely with Murray Jones, who oversaw Alinghi’s rigs. Hall had recently acquired Jones’ spar making shop in Auckland and with Murray staying on, we were working with not only a customer but a business partner as well.

Our spars worked flawlessly and Alinghi lifted the Cup from Team New Zealand.

For the 2007 Cup, along with Alinghi Hall built spars for Luna Rossa and Mascalzone Latino in Bristol and the Swedish Victory Challenge in our Holland facility.

We dedicated a separate building to Alinghi in Bristol. The spars for the other two teams, Luna Rossa and Mascalzone Latino were built-in Hall’s main building but never at the same time. Team members from each team were only allowed in the building when their project was in build. 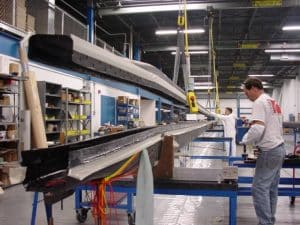 Alinghi’s final mast, with some major improvements, was a beautifully finished, elegant mast.

But not for long.

Lifting onto a front-loading 747, airport personnel let the mast to slip off the forklift. The ten-foot drop severely cracked it as it hit the ground.

The mast was immediately brought back to the shop. We repaired it in three days and sent it off again but not before adding some weight due to the repair. Clearly, this was going to be a practice mast.

After the Cup, we asked Murray Jones if they ever used that last, repaired mast.

“We won the Cup with it,” he answered with a wide grin. They’d kept it quiet, but the repaired mast turned out to be their best. 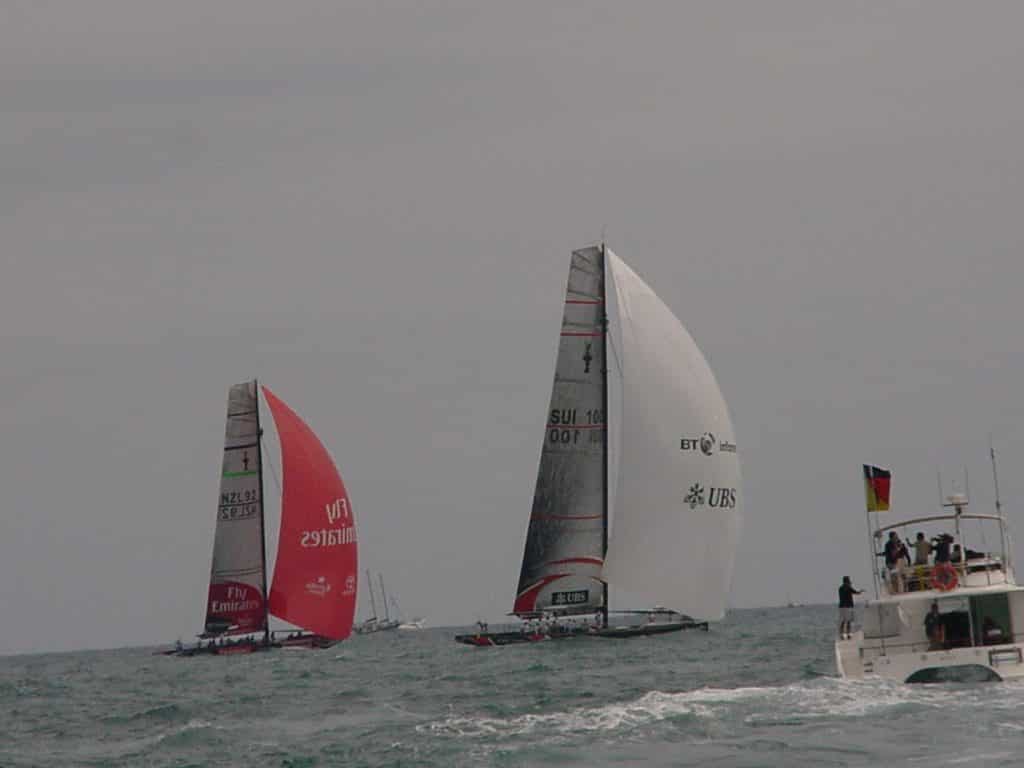 Alinghi during the 2007 America’s Cup

Things got turned upside down right after that Cup and a Deed of Gift Challenge resulted from Team Oracle. A Deed of Gift Challenge reverts to original rules which stipulates a maximum waterline of 90 feet but little else. It was clear we were back in the Wild West design-wise. It was clear the contestants would be huge multihulls. Oracle chose the trimaran route; Alinghi a catamaran.

Alinghi built their own rigs but Oracle contracted Hall for their rigs. During the time we were making the first wing-shaped soft sail mast for Oracle, I went to dinner at Ben’s house. He brought me down to the cellar to show me his “latest project”. What I saw blew me away: he had built himself a multi-element carbon solid wing mast for his A Cat. It was a piece of technical art.

Apparently, it was fast sometimes but not always. So, after all that work, Ben went back to his normal mast. But fellow A Cat Sailor and Oracle sailor Glenn Ashby saw the mast and was impressed. At Ashby’s recommendation and with Ben’s blessing, Oracle bought the mast. Apparently well out of the limelight, the team tested the wing extensively and convinced themselves it was superior to Ashby’s standard A Cat rig.

“It was Ben’s mast that made us go for the big wing mast on Oracle,” Russell Coutts told me after the Cup.

Their huge wing mast had to be the biggest dice roll in America’s Cup history. With minimum time to make and no alternatives, Oracle built their huge wing and had only a day or two to test it in San Diego before shipping it off to Valencia. Our role was to make the leading edge of the wing’s flap. Although small compared to the main wing, its six elements were so big that standing in the mold, one couldn’t see out.

Oracle people reported that the only times that mast didn’t have some sort of show-stopping failure were in the two actual America’s Cup races.