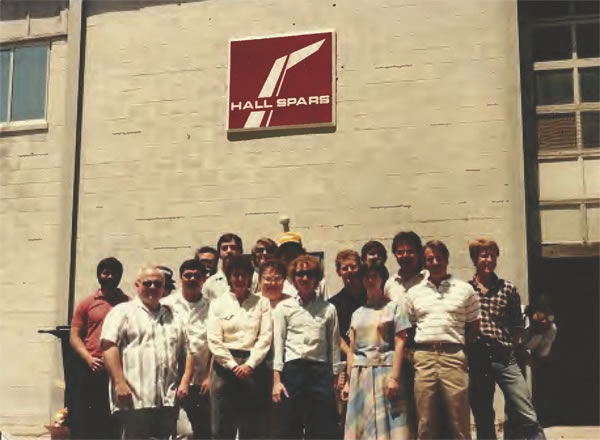 Pioneers in the use of carbon, Hall Spars celebrates its 40th anniversary after opening shop on 9th June 1980 in Bristol, Rhode Island. At a time when the Whitbread was only just taking its first steps and the first Vendee Globe race was still a decade away,  Eric Hall and Phil Garland took advantage of the emerging carbon fibre trends of the time, helping to transform the yachting industry into what it is today.

Specialising in the design and production of high-quality masts, booms and components for sailing yachts, over these 40 years Hall Spars is proud to have remained dedicated to providing all of their clients with the highest quality and reliable rigs that they can depend on.

In 1988, Hall Spars moved into their first state-of-the-art facility at 17 Peckham Drive, Bristol, which put them on the road to success. Just one year later, they created their Advanced Composites Division, as well as added a “clean room” and a 50-foot curing oven to their new factory space, followed by an aerospace-quality 20m autoclave in 1992. This was the beginning of a new manufacturing era for Hall Spars, moving from wet lay-up lam to pre-preg oven cured parts allowing them to reach the highest standards. These standards of the highest quality have continued over Hall Spars’ forty years in operation, with the company always striving to maintain their best standards in GL rigs, Rina Rigs, and Paint booth ICOMIA standards amongst others.

Over the next decade Hall Spars would continue to supply their carbon rigs to numerous yachts, creating their reputation as a dependable world renown carbon fibre spar maker. This included their first venture into the America’s Cup in 1992, with the supply to America3, as well as to the one design production boats, the J/120 and J/130, in 1994.

Hall Spars has had many milestone achievements in the racing scene over their four decades, with one of their biggest landmark achievements coming in 2003 when Alinghi, rigged by Hall Spars, won the America’s Cup. Only two years later they delivered their first rig to the Volvo Ocean Race team Pirates of the Caribbean skippered by sailing legend Paul Cayard. Furthermore, they were the supplier for many one design classes, namely the hugely popular Swan 45 Class, as well as the Swan 42, J111 and J122.

They also manufactured the largest carbon-fiber mast that they had ever produced in 2002, a whopping 182 feet in length, for Baltic 147 Visione, which took a year-and-a-half to design and build. Although this would later be eclipsed in 2006, with the delivery of a 188-foot mast built for the Wally 143 Esense.

Not only did Hall Spars make key achievements on the water, but also on land. At the turn of century Hall Spars expanded their reach to two more strategic locations, in Europe and New Zealand, with the opening of their Breskens factory in 2001 and their Auckland factory in 2007. This was a significant step for Hall Spars as it now meant that they now had three easily reachable global locations, helping them to better serve the needs of their customers, a cornerstone of the company’s core values. Both factories followed the same blueprint as the original US headquarters, with a strong focus on innovation, high-quality controlled products and an experienced team. To this day, Hall Spars continues to deliver a high level of both product quality and customer service thanks to the commitment and dedication of its people at both of these locations.

With more factory space, Hall Spars was then able to expand into all areas of the yacht sailing world and successfully triumphed particularly in the cruising market. Building on the tools developed for engineering racing yachts, which resulted in winning the America’s Cup and TP52 Class, Hall Spars were able to develop their cruising products significantly. They were one of the first spar builders on the scene to provide masts and booms built to handle mainsail furling systems, which is a major selling point for those in the cruising sector. Today this cruiser market has greatly benefitted from the ease of use and style that these products bring. Hall Spars reaffirmed this with the introduction of their Oceanfurl furling boom range, developed and refined for the past ten years and tested in all conditions. Their Oceanfurl in-boom furling system is sophisticated and functional with a trouble-free operation and unrivalled attention to detail.  Hall Spars continues to lead this market, supplying to reputable companies such as Nautor’s Swan, Solaris, Oyster, Mylius, CNB and Baltic Yachts amongst many others. One recent notable project was the supply to the new Swan 78, Azzurro, launched in Finland at the end of 2019. Featuring an iconic Hall V-boom the boat is faster, safer, easier to control and, more comfortable at sea.

Hall Spars has always prided themselves on providing the best product, based on years of development and expertise. It’s in the company’s DNA to constantly evolve their products through continuous research, innovation and development, helped by one of the largest mast design data bases in the industry. This desire to strive for the best has been helped by their highly skilled and dedicated team, many of who have been with the spar maker for decades such Jacques Swart, Dave Ridley, Johnny Verstraaten and Geert Kuypers.

Hall Spars joined the North Technology Group in 2017, bringing to the company further stability and expertise whilst broadening the Group’s reach with the addition of Hall’s male mandrel mast building technology. Within the Group, Hall’s customers benefit from a complete package, working together with owners, yacht designers, yards, rigging companies and sail makers to provide a fully optimised rig which translates into a more performant or comfortable setup depending on what the customer is looking for.

As Hall Spars approaches four decades in the business, the company still leads the way in spar design and manufacturing, thanks to their youthful passion and energy for what they do. Although the product has evolved over the years, buying a Hall Spars spar today is the same as it was 40 years ago. When you get a Hall Spars’ mast or boom you know you are receiving a product that means something, which has 40 years of experience, knowledge and dedication engrained into the carbon fibre. The company’s stability and loyal customer base ensures that they will continue to be around for at least the next 40 years, delivering great products for beautiful yachts that their customers will continue to appreciate and love.

You can get in touch with the Hall Spars team at info@hallspars.com.