Hall Spars had its beginnings in the 1960s when I was selling Flying Dutchman fittings for a German Company FTS (among other things, the original inventors of what today Harken calls “magic boxes”). I was also dreaming of starting my own marine hardware company.

After three years at Grumman Aerospace, I joined designer Brit Chance to assist in designing rig and deck plan upgrades for the America’s Cup Defender Intrepid in 1970.

Two years later I joined Union Masts of Bremen Germany, jointly owned by Lowell North, Eckart Wagner and Bremen sailmakers Hans and Berend Beilken. In 1975, I left Union Masts and joined Tim Stearn’s mast start up in Sturgeon Bay Wisconsin. After six months I was hired away by Schaefer Marine to start their new mast company, Schaefer Spars. In 1979, Schaefer decided to stop making finished masts but only supply mast extrusions and parts. I wanted to continue making masts, so I negotiated an exclusive license to the products I developed for them and founded Hall Spars. Hall Spars officially opened on June 9th, 1980. Founding with me was Phil Garland who ran the rigging side of the operation. Shortly after that Dirk Kramers joined us in August of that year. With Phil and Dirk, Hall Spars left the gates with two bona fide world class talents. The company began with the three of us, secretary Cathy Resendes, four mast builders and a welder. The first mast delivered was for New Bedford attorney Johnny Bentley’s Metalmast 30.

Later that year, when Ted Turner’s Courageous team lost their mast, Hall was chosen to repair it.

Also, during that year Ben Lexcen visited our shop in the early summer and bought spreader extrusions from us. We never knew (and never asked!). But three days before the Cup races that year I found out. Visiting Newport that Sunday with my parents and young family, I noticed Australia II docking after a heavy wind practice with a bent jumper strut. Leaving the family to their own devices, I contacted Australia II’s operations chief, Warren Jones, and offered assistance since the jumpers were probably made from the spreader sections that we sold to Lexcen in late May. He said, “follow me” and soon I was on the syndicate’s power yacht standing before Alan Bond, John Bertrand and Jim Hardy having a rather formal lunch. Characteristic bombastic, Bond ordered me to join their lunch and have some of Hardy’s fine white wine. Meanwhile my family knew nothing of my whereabouts. Long story short, we collected one of the shore team, hopped in their station wagon and drove to Bristol to get more spreader extrusions. Complicating matters was a huge parade commemorating Bristol’s 350Th anniversary of its founding. Finding gaps in the parade, we shoulder-carried two 18-foot sections across the street to our waiting car. Even after such an exciting story, my family wasn’t impressed. I was in the doghouse for the rest of the day.

Australia II went on to lift the Cup for the first time in history.

In late 1983, we received our first Maxi Boat order, a rig for the 80-footer Boomerang.

Along with the order for the rig, the Boomerang team gave us our first carbon fibre spar order, a spinnaker pole using a wet layup process we’d recently licensed. The same year we made a pole for the J Class yacht Endeavor.

This decision was to have a huge impact on the future of the company.

In 1984 my brother Ben joined the company. It was a welcome event for many reasons not the least of which was that Ben was no longer running a company that was competing against us. Of course, his impact on company sales was immense. Soon after, his wife Nan joined us and in a very short time she became the friendly voice of Hall Customer Service. It is not a stretch to conclude that around the US, more people knew Nan Hall personally than either Ben or me. 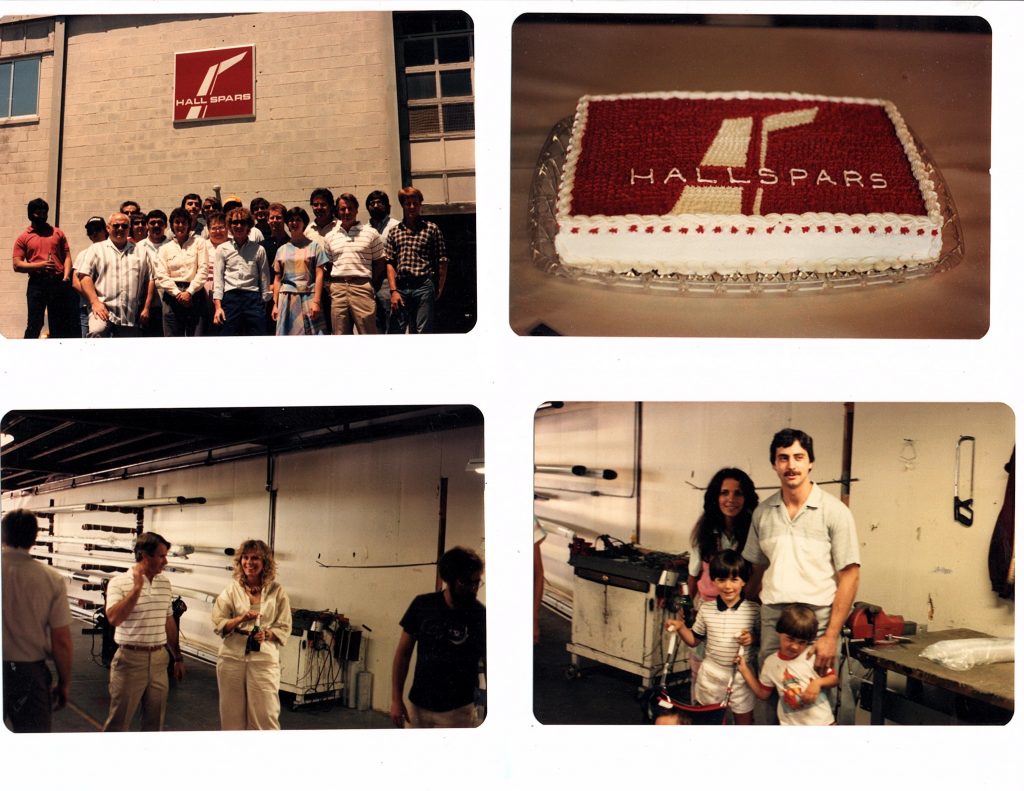 Hall’s First Big Anniversary: 5 Years. Clockwise from upper left: 1. The Hall Five-Year team. Ben third from left; Cathy Resendes to the left of Ben; Dirk Kramers just behind Ben to the left; Eric half hidden in back next to yellow hat; Phil Garland was away sailing. 2. The Five-Year Anniversary cake. 3. Future America’s Cup sparmaker Jim Gagnon and family. 4. Ben with anniversary guest.

Next: Hall Makes a Big Investment in Advanced Composites