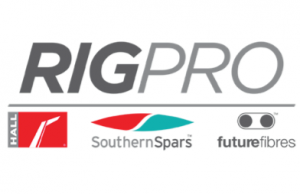 (4th Oct 2018)- RigPro, the Southern Spars, Future Fibres and Hall Spars service organisation, announces the launch of its new service offering and brand, underpinned by a new business strategy with customer experience at its core.

Through this re-launch, RigPro aims to become the number one choice rig and rigging service and engineered solutions provider with a strong commitment to having the highest standards of customer care and service.

RigPro plans to expand to more locations through a global franchise, introduce a 24/7 emergency response service, strengthen its presence at regattas and expand its service design engineering practice – all with the goal of becoming more responsive.

Building upon their already superior technical expertise, a new and unique three-tiered rigger certification will be launched as well as an apprenticeship programme to develop the next generation of riggers.

The new RigPro is the authorised service provider for Southern Spars, Future Fibres, Hall Spars and also Marten Spars, Nordic Masts and Omohundro. As an integrated part of the North Technology Group´s mast businesses, RigPro has 24/7 access to their global database of yachts, as well as their superior engineering design capabilities. This will give RigPro and their franchisees the unique ability to provide engineered solutions above deck, upgrades and modifications.

“This is an exciting change for RigPro and marks a strategic milestone in our future direction. It confirms our commitment to a superior level of service for which there is high demand within the sailing community.”

“The growth of RigPro within the last few years has shown that there is a definite and growing demand for a global authorized service provider. With a clear focus on customer service and care, the new RigPro will fill this gap in the market.”

As the NTG Mast Group´s service division, RigPro manage and maintain spars and rigging, and continue an unmatched level of customer care throughout the lifecycle of the rig.  Their strategically positioned service centres around the world and access to mast design and service history files gives you 24/7 support.

Hall Spars has been a pioneer in the field of composite spars for almost four decades. The company was recently acquired by the North Technology Group, and is operating at its facilities in Auckland, New Zealand and Breskens in the Netherlands, with a dedicated service centre in Rhode Island, US. With their integration into one of the world’s leading groups in the marine industry, Hall’s strong commitment to quality and reliability has been reinforced.

Future Fibres, a Southern Spars brand, has produced first class rigging systems for both standing rigging and torsional cables for almost 25 years. Their company is comprised of a dedicated team of designers, engineers and technicians delivering exceptional technical support to all projects. Future Fibres offers a complete range of fixed, dynamic rigging and furling cable solutions.

Southern Spars is a division of the North Technology Group, the world leader in sail-making technology. Southern Spars specialises in the design and construction of carbon fibre spars and components, rigging and rig servicing. As the industry pioneer, Southern Spars built its first carbon spar in 1990. Since then the company has pursued a passion for delivering world class superyacht and racing spars, carbon rigging and service.