The mid-eighties were years of rapid growth with blue ribbon custom spar orders on successful race boats too numerous to name. Meanwhile we were enjoying increasing success with top name builders such as Pearson, S-2, Mariner, Sabre, Hinckley and Baltic Yachts to name a few. And when Ben joined us, he brought with him the huge J-Boats account. We were now rolling!

In 1986 we made rigs for Gino Morelli-designed Formula 40 catamarans. One, Region Nord pas de Calais, was skippered by Frenchman Alain Comyn. I joined Alain in a practice session on a blustery day in Brest, France. The 30-knot puffs coming off the hills scared me you-know-what-less. I felt like we would pitch pole on every puff. But Alain was a skilled heavy wind multihull sailor and we just ripped along. I almost got used to it. The Formula 40s started Hall’s long love affair with multihulls. 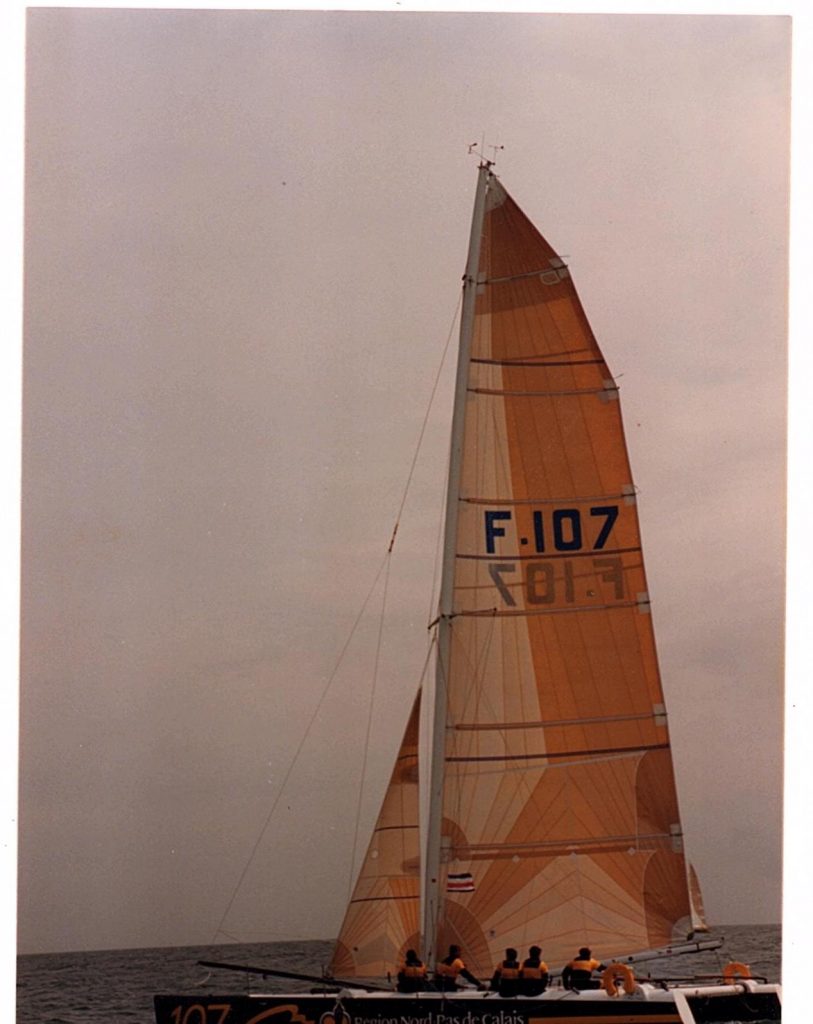 As Hall Spars moved into the mid-eighties, we were looking for proprietary products to sell without the need for selling masts or booms. Enter the QuikVang.

We liked the idea of the fixed vang that held up the boom in light air and kept constant tension through all boom angles. Fixed vangs at the time were adjusted with a “steering wheel” mounted on the vang tube. But adjustment was slow. We wanted rapid adjustment for changing wind conditions and instant release in a broach. Our answer was a vang with an internal cascading tackle that did everything we wanted. We added a custom heat treated 17-7 stainless steel spring inside, so you couldn’t toast the vang tube or break the boom by over-trimming the main. We chose the color combination at a shop meeting when we showed the guys a couple of alternatives. Co-Foreman Steve Fernandes instantly chose the bronze end fittings with red sheaves version. And that’s what we went with.

The name was easier: since it was rapid, we called it the QuikVang. It even resulted in a Kleenex-type generic word for solid vangs in France. They were called “Le Quik”.

As most know, the QuikVang prospers today, continuing a 34-year run.

In 1988 we outgrew our “lucky” plant on the water in Bristol and built a new building in a new industrial area on the other side of Bristol. The new building was great, but Ben and I missed our corner office overlooking Narragansett Bay. You can’t have everything, and we had work to do anyway – there was no longer time for gazing out the window.

In the late 80‘s while looking for business in Europe, we were contacted by Louis Sander who was working in the Genoa area for hardware distributor Tomasoni Topsail. They were looking to expand, and Louis asked if they could represent us in Italy. We were impressed with the professional and affable (he always talked with a natural smile) Sander and said yes. Louis got us a lot of work in Italy, notably the Nauta 70 My Song in 1990. We made two booms for My Song. The first was a cruising boom with a slick set of flush retracting flaking racks that we were very proud of. The other, which came soon after, was a lighter boom for racing. After the first race, our ingenious cruising boom was never used again. Oh well. 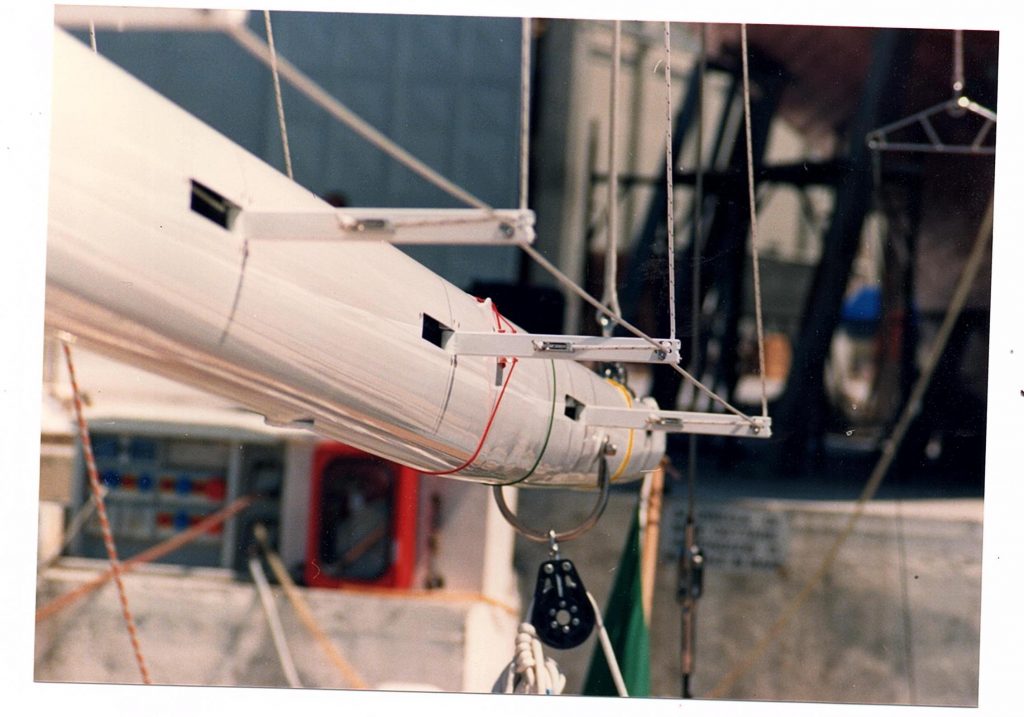 In the early nineties, Phil Garland’s Hall Rigging side of the business was flourishing. He decided to add marine hardware distribution and hired the perfect person to run it, Cara Read. Like Nan Hall, Cara soon became known nationwide as the voice of Hall Rigging. Cara sold a lot of hardware. We soon were annually one of Harken’s top distributors.

The Big Move to Advanced Composites

From Day One, Dirk Kramers and I envisioned a move to oven-cured carbon spars. Years earlier, I got a taste of Advanced Composites at Grumman as a member of the F-14 Design Team.

As mentioned, we had made carbon poles for Boomerang, Endeavor and others, but only with “primitive” wet layup methods. And carbon masts and booms were still illegal on race boats.

Finally, we said the heck with it and built a clean room with 50 ft vacuum pressure curing oven for prepreg carbon. To run the new department, we hired Kenny Madeiro, destined to become the face of Hall’s composite operations.

There was plenty of opportunity for non-IMS sailboats. One of the first spars was a carbon Nomex honeycomb wing shaped mast for our newly acquired Roberts 27 high performance catamaran Hall Spars, the company’s first “test” boat. A number of “test” boats were to follow as we’ll see and we certainly tested stuff on them, but truthfully, we were looking for fun and Hall Spars provided a lot of it, racing in New England Multihull Association (NEMA) events.

The biggest project in our new curing oven was ambitious: a highly ambitious Bi-Pole, aero-shaped rig for Olaf Harken’s 50 ft test yacht Procyon. The tubes were cured straight but “persuaded” into a curve with spreaders holding their shape and pulling the chainplate lugs together (under such a high load we were biting our nails!) so they could be pinned during stepping.

At one of the regattas, Ben asked fellow DN sailor Jeff Kent to join us on Hall Spars. He knew catamarans and was a terrific crew. Driving home after the racing, Ben and I had the same thought: “We should hire this guy.” We did and made him official partner in our new sister company, Hall Composites. 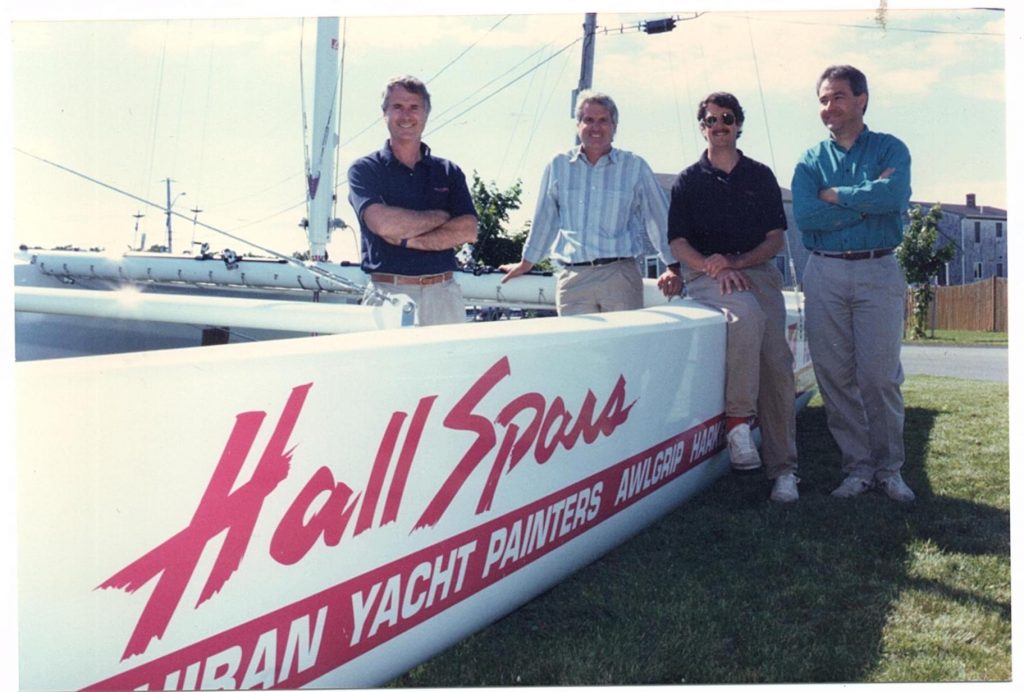 One project in 1991 was a pre-preg carbon/Nomex honeycomb boom we made for the Japanese America’s Cup entry that caught the eye of the America3 guys. We told Project Manager Peter Wilson we could do an even better job with an aerospace grade high pressure autoclave curing oven. He said, “If you guys get an autoclave, we’ll keep you busy seven days a week until the end of the Cup.”

We immediately bought an autoclave and broke ground for an addition on our building. Before the America3 stuff kicked in, we began selling autoclave-cured masts. The first was for Principessa, a Garda Lake racer. The second was for a Swan 48. The third was a whopper: we were asked to make carbon spars for a ketch rig 125 ft Bruce King design. Smarter people might have moved in a more measured fashion and declined, but take it we did, and we surprised ourselves at how well and innovatively it was designed and engineered. 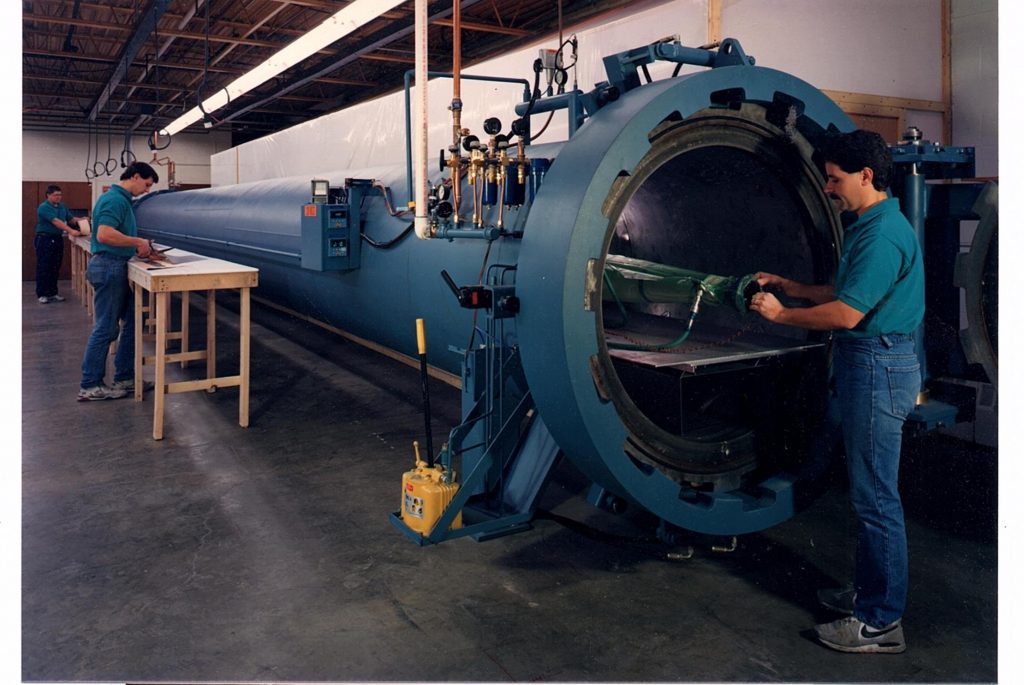 America3 kept their promise and then some. We made them booms, spinnaker poles, rudder stocks, hull parts. Luckily, Jeff Kent and Kenny Madeiro, no strangers to very hard work, kept up with America3. Even so, a few times we had to holler, “Uncle!” but mostly we learned a huge amount that summer, easily five years’ worth of learning under normal conditions.

Again, we were rolling! This time with a flying start into Advanced Composites carbon spars that met or exceeded aerospace standards.